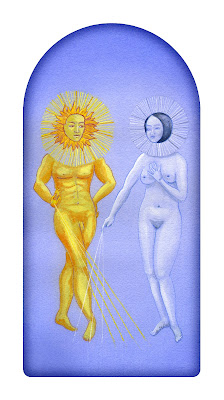 Revolving and orbiting around the Sun

The Moon is soft in the night sky

In the reflected light

Pulling the waves and tides of emotion

The Sun shining on the Moon

Turning the wheel of the year

Seasons of growth and rest

Radiate your warmth and brilliance

Bathe in the luminescence of love

The Sun and Moon are also called Sol and Luna. The Moon orbits Earth as Earth orbits the Sun. The Sun, Moon and Earth are held together by gravity. The Sun illuminates the Moon as it revolves around Earth. Earth casts a shadow on the Moon, causing the various phases of the Moon. The Sun is about 400 times larger than the Moon, and is also 400 times further away than the Moon. The Moon phases control the tides of the oceans and seas and our moods and emotions. The Lunar cycle is 29.5 days and it is inked to women’s menstrual cycles. The Sun is responsible for life on Earth by warming the planet and causing the seasons of growth and rest, and it affects our energy and sleep cycle.

Many rituals around the world are based on the phases of the Moon and the Sun’s position as Solstices and Equinoxes and Cross-quarter days. The Sun and Moon represents birth and rebirth because of the seasons and phases. The Sun and Moon mean many things to different cultures and have a place in many religions and myths. There are hundreds of Sun and Moon deities around the world. Sun Gods include: Ra - Egyptian, Lugh – Celtic, Surya – Hindu, Inti – Incan, Mithra - Persian. Some Moon Goddesses are: Selene - Greek, Luna – Roman, Mawu – African, Chang’e – Chinese, Hina – Polynesian, Coyolxauhqui – Aztec, Hanwi – Lakota.

In many cultures the Sun symbolizes the masculine, and the Moon represents the feminine. They are often depicted in relationship to each other, symbolizing the union of opposites despite differences and polarity. The Sun symbolizes power, energy, rationality and strength whereas the Moon symbolizes dreams, flow, cycles, intuition and beauty.

Image inspired by a lithograph “Atalanta fugiens” by Michael Maier 1618

Sacred Union Oracle will be published in the Fall 2022