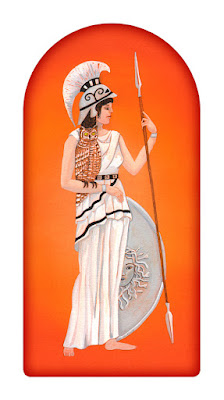 I bestow the gifts

Of knowledge and clear communication

Lead the fight for freedom

Athena is the Greek Goddess of wisdom and philosophy, warfare, and a patron of arts and crafts.

Athena’s father Zeus married Metis, Athena’s mother’  who is described as the wisest among gods and mortals. When Zeus found out that Metis was pregnant, he was afraid because it had been prophesied that Metis would bear children wiser than their father, so he swallowed Metis. Athena was born from the forehead of Zeus. Athena is a maiden Goddess, a virgin.

Athena is often depicted with an owl on her arm. The owl brings knowledge and whispers wisdom in Athena’s ears. Athena bestows “the owl gift” on her worshippers, giving them the ability to write and communicate clearly. In some accounts Athena was an early Bird Goddess. Occasionally she is portrayed with wings and an owl mask.

Athens is named after her and the Parthenon on the Acropolis of Athens is dedicated to her, built in 440 BC.  The owl was the mascot of the Athenians who worshipped Athena and coins were made with Athena on one side and the owl on the other.

Beautiful Medusa was a high priestess in the temple of Athena. Poseidon lusted after her and raped her in the temple, breaking her vow of chastity. Athena was so enraged at the defilement of her temple that she turned Medusa into a Gorgon with snakes for hair and a gaze that could turn man to stone. Athena wears Medusa on her shield to ward off evil.