Innana is the ancient Sumerian Goddess of love, beauty, sex, justice, war and political power. Innana is known as the Queen of Heaven and is the enforcer of divine justice. The descent of Innana into the underworld and her ascent is her most famous myth. 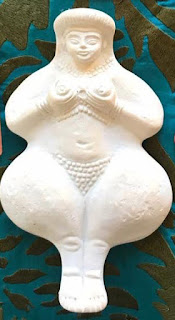 In 1997 I bought this sculpture of Innana - I didn't know much about her, but she called to me. As soon as I brought her home I began to experience a series of synchronicities that made me pay attention. This visual journal entry records some of the first sacred moments I had with her.


Almost ten years later, I was invited to an Innana ritual where we enacted her descent and subsequent ascent. As Innana descended into the underworld she had to remove seven garments which we associated with seven qualities we needed to rid ourselves of: crown - ego, rings - false pretenses, necklace - constraints, breastplate - self-judgement, girdle - selfishness, skirt - shame, bangle - addictions. As we ascended we replaced each article with these new qualities: ability, enjoyment, comfort, forgiveness, empowerment, intention and assurance. It was one of the most empowering rituals I have ever done and by the end I felt like the Queen of Heaven.


I, Queen of Heaven
Traveled to take hold of the underworld
Through seven gates I passed,
Stripped of my garments - the seven divine powers
Until naked, I sat on my dark sister's throne
Seven judges with the look of death, with the speech of anger
With the shout of heavy guilt, slew me
Through nature, reborn, I ascended
Travel with me into your dark unconscious
And rise again naturally