Yemaya also known as Yemoja, is the African Goddess of water, oceans, rivers and springs. The name Yemaya literally means Mother Goddess whose children are fish. Yemaya originated in West Africa as a Yoruba Orisha, a motherly deity who protects and aids women's mysteries - conception, childbirth and parenting. She was transported to to the west with slaves and is worshipped today in Cuban Santeria as the mother of all living things, ruler of the ocean and in Brasil Candomble as the patron of fishermen, mother of creation and moonlight. Yemaya represents the collective unconscious and the dreamworld.

When I first began to do shamanic journeying I would travel down the roots of a tree to a cave with water in it. In the water I would see the reflection of an African woman. I believed it was a merging of the two loving nannies who raised me in South Africa. Over time I began to see her as the Goddess Yemaya. I recorded my encounters with Yemaya in my visual journals. 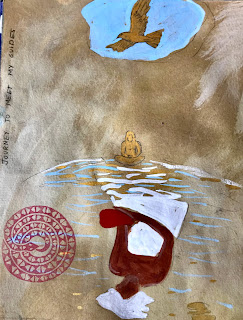 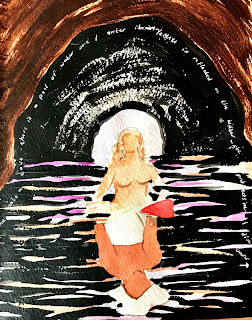 Eventually I made a large oil painting of me lying on Yemaya's lap. At the top of the painting is a pansy shell (the name in South Africa of a sand dollar). I had spent many a day as a child, catching them with my nanny. Cowrie shells are traditionally the representation of Yemaya's wealth. I took the name Yemaya in my Reiki certification. 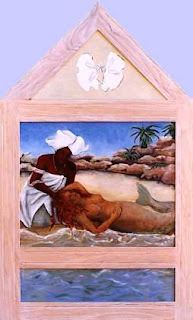 In my deck: Invoking the Goddess Oracle and Action, Yemaya speaks to you saying:

Come bathe in my waters
I am the Mother of all living springs, rivers, oceans
Bring me offerings, my children
I will comfort, protect, and nourish you
Tell me your secrets
I am the great collective unconscious
Ready to share ancient wisdom 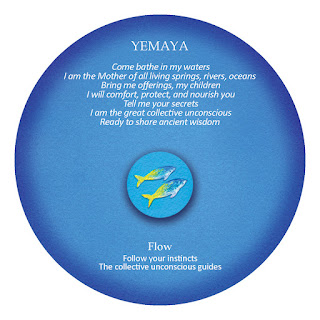 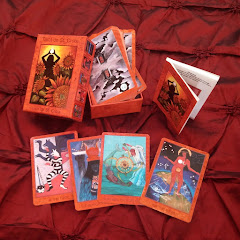 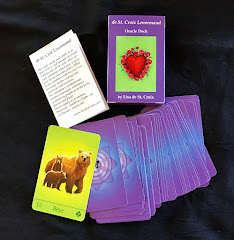