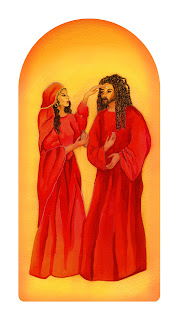 Following the path of love

Devotion to the Divine

Anoint and awaken the third eye

See the Divine in each other

Mary Magdalene travelled with Jesus/Yeshua as one of his followers. She was a witness to Jesus’ crucifixion and resurrection. She helped support his ministry, indicating that she probably was a wealthy woman. Magdalene was the one who really understood Yeshua’s teachings. Mary Magdalene is mentioned twelve times in the canonical gospels, and is a central figure in Gnostic writings. In the Gospel of Philip, Mary Magdalene is described as Jesus’ companion, the disciple Jesus loved the most and the one Jesus kissed on the mouth.

The Cathars believed that Mary Magdalene was Jesus wife. Some believe that after the crucifixion Magdalene traveled on a boat with their child Sarah and two other Marys to the South of France where they landed. The town named after them - Saintes-Maries-de-la-Mer is the capital of the Camargue. The Cult of Sarah attracts hundreds of thousands of pilgrims to the town. Sarah means princess in Hebrew and some believe she was the bloodline of Jesus that still exists in and .

In another version it is believed Magdalene lived out her last days as a hermit in a cave in and that her relics remain in Saint-Maxim-la Sainte-Baume. Magdalene is considered a saint in the Catholic, Eastern Orthodox, Anglican and Lutheran churches. In 2016 Pope Francis declared July 22nd as her Feast day and for her to be referred as the “Apostle of the apostles.

From Sacred Union Oracle which will be published in 2022