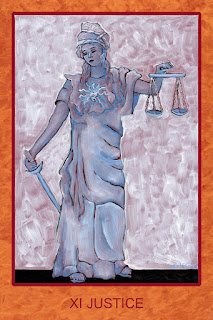 I am in my Justice year according to tarot numerology. The way you work it out is to add your birthday and birth month to the year we are in. Then add each of those numbers until you reach a number, 22 or less (22 would be the Fool).  Each number corresponds to a card in the Major Arcana. My numbers add up to 11 which is the Justice card. So when I was called up to do Jury duty and was selected for a civil trial I was not surprised.

Being a free-spirit with no boss, time constraints or rules to follow, it came as a rude shock. I felt conscripted - told it was my duty as a citizen to serve and if I did not I could serve time in jail!

The trial was litigious. One party suing the other for damages for $5 to $8,000,000. About fifteen people testified all swearing to tell the truth and yet there were several obvious lies. Tears and sobbing broke my heart and the lawyers disgusted me with their manipulations, mockery and attempts at mind control.

We, the jury were shuffled back and forth to a windowless room where we were fed donuts, coke and coffee. During our break I listened to my fellow jurors talk about hunting (bagging 4 Elk) football, car mechanics, rodent control and ice fishing.

As is my way I pulled tarot cards: 3 of Pentacles at the beginning of the trial, the Devil for the Plaintiffs, Ace of Pentacles for the Defendants and Five of Cups at the deliberation. Well, there was a betrayal, the three Plaintiffs certainly had a lot of shadow stuff, the two Defendants won.

In my Justice card Themis holds the scales and a sword. The sword symbolizes wisdom and intellect and the scales; balance. I had to use my rational mind, paying attention to every word and detail to make my decision. Yet, the balance was that my tarot cards spoke the truth and nothing but the truth.
Posted by Lisa de St. Croix