Four of Cups and Death 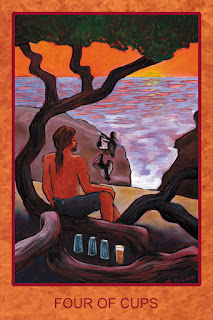 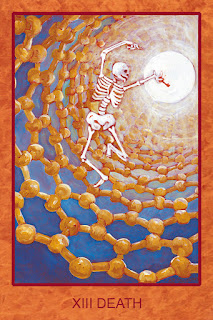 I had planned to write a blog on the Death tarot card for the Day of the Dead, but I found myself grieving instead for my beloved brother Jean Pierre who passed away on October 25th. I had painted Pierre in my Four of Cups, depicting how he had chosen a different life, knowing he had, had enough of the rat race as he called it. He was a surfer, a nature lover and gardener. In the card you see him sitting on Sunset Cliffs in San Diego. It was his evening ritual to go there and smoke a bowl, have a beer or two and watch the sunset. He had landscaped the wild area, making it beautiful by clearing away debris. He also could not manage very well taking care of himself and threatened suicide when things became too desperate. Last year on several occasions he talked about blowing his brains out, and then six months ago he was diagnosed with CJD - a rare brain disease that literally creates holes in the brain. His birthcard was the Magician - he was a powerful manifester. As I am also a Magician, I wanted to create magic, manifest a positive world view for him. It is only now when I look at this card that I see a man who had enough of life. The Four of Cups is about not wanting any more.

The Death Card is the number 13. If you add the two digits you arrive at 4. These cards are in the same constellation. I think in some ways my brother longed for the release of Death. I painted a happy skeleton with a key in his hand symbolising unlocking the big mystery. As my brother was dying he saw my deceased parents and would smile. Death can be the end of something no longer wanted. I see Pierre dancing in the light. Free.
Posted by Lisa de St. Croix