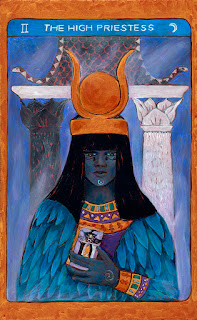 The High Priestess invites us to tap into our intuitive inner wisdom in order to create transformation. She is the powerful archetype of magic and mystery, the initiator. Isis stands in front of the temple of duality, the balancing of shadow and light.

This was the last card I painted before embarking on the Tarot Tour of Northern Italy.
One of the places we visited was the ancient Isis Temple in Bologna which is now part of the Basilica di Santo Stefano. White Ley lines intersect at the entrance to the octagonal Templar temple of Santa Gerusalemme di Bologna.  As you enter the dark temple, a circle of twelve,  two thousand year old marble columns become visible, and in the center besides a large altar a staircase covered by a decorative grill leads down to the underground river . This is where women went to worship Isis and ask for fertility blessings.

I knelt down and said a prayer for this deck which is now in its final trimester, for it to be birthed and to flourish, to carry a message of love and hope to many. I inserted this card between the delicate scroll work and it fluttered down taking its place beside coins cast by other women asking for fecundity. I felt as if I was a pilgrim that had travelled here to perform this initiation for my deck.